To share your memory on the wall of David Beard, sign in using one of the following options:

David will be sadly missed by his wife of 56 years, Elaine (Rose) and children, Paul (Charleen) and Susan (Patrick). He is survived by his brother John and predeceased by his brother Robert. He will be lovingly remembered by his grandchildren, Stuart, Rachel, Michelle, and Kaylee and a supportive extended family. He will be remembered fondly for his gregarious nature as a storyteller, mentor, friend, ‘lighthouse keeper’ and for his community service.

After attending Trinity College, University of Toronto and Osgoode Hall, he was a founding partner of the Toronto law firm, Beard Winter, specializing in marine and transportation law. He was proud of his service as a Lieutenant in the Canadian Reserve Navy.

David retired to Craigleith where he enjoyed sailing, tennis, golf, curling and skiing with friends and family. Since working in a lumber camp as a teenager, he continued to love the outdoors, cutting down trees and sharing bonfires on the beach.


The family is thankful for the care and compassion that David received from in-home caregivers and the staff at Sunset Manor.

There will be a private family service at St. George’s Church in Clarksburg. A celebration of life will be held at a later date, as conditions allow.

To send flowers to the family or plant a tree in memory of David Beard, please visit our Heartfelt Sympathies Store.

The Frerkings and Heather Lennie sent flowers to the family of David Beard.
Show you care by sending flowers

Posted Oct 20, 2020 at 08:40am
David will always be remembered fondly for his encouragement, support, guidance and friendship in my formative years as a young lawyer at Beard Winter. Those years will never be forgotten. My deepest condolences to his family during these challenging times and may you all remain safe. Leilah Edroos
Comment Share
Share via:
SP

Posted Oct 19, 2020 at 10:04am
Dear Elaine, Paul, Susan and families. Extending sincere condolences from the Powell family on the loss of Cousin David, a true gentleman and scholar. We look forward to sharing family memories with you, especially of your kindness and generosity to us all, especially Ginty. Sending much love to you all from David, Cynthia and Susan Powell.
Comment Share
Share via:
KN

Posted Oct 19, 2020 at 01:38am
We are so very grateful to have known this man. His daughter, Susan Beard Frerking, is a true testament to his fatherhood. The many ways David shared his joy over his wife, children, and grandchildren is an example for all of us. Great stories! We are sad to be separated from him, but rejoice in the hope of heaven!
Comment Share
Share via:
TF

The Frerkings purchased flowers for the family of David Beard. Send Flowers

Posted Oct 18, 2020 at 07:41am
Mrs. Beard, Susan and Paul, With beautiful and wonderful memories of your dad and best friend, Mrs. Beard, I am so very sorry for your loss. With God 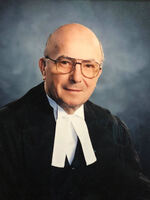